So you are beginning your next project, and you have chosen to utilize Node.js as the programming language. Of course, Node.js, like so many other technologies, has its supporters and critics, and this is no exception.

Nonetheless, there is no doubt that it extensively comes into use for effective services, making it a powerful force no matter which side of the fight you are in the discussion.

This blog will cover what Node.js is, how it diverges from other frameworks, how Node.js use cases are applied and how different industries can leverage Node.js technology for swift success.

So, What exactly is Node.js?

The significant aspect of understanding Node.js is that it is not a JavaScript framework. Instead, Node.js is a server-side runtime environment based on the event-driven programming language and has non-blocking I/O capabilities.

Node.js is available as a free download from the Node.js website. According to a report, Node.js technology comes in use for 1.9 percent of all websites.

The use of Node.js makes developing I/O- and data-intensive web apps much more efficient and straightforward, thanks to its unique I/O paradigm.

The ability of Node.js to utilize JavaScript on both the front-end and the back-end has opened new opportunities in the building of online applications. 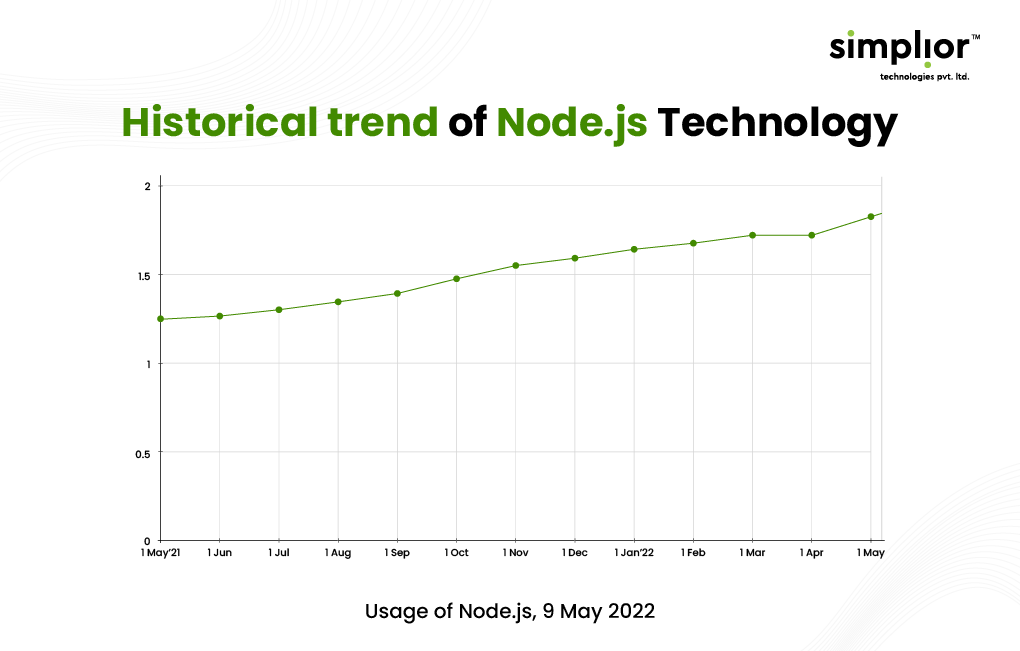 What Distinguishes Node.js from other Frameworks?

Even though there is no difference between Node.js and other frameworks in terms of the programming language employed, Node.js is different from the other JavaScript frameworks. It has a separate set of APIs.

Contrary to other frameworks, Node.js includes many APIs for back-end development, including HTTP requests, streams, support for file systems, and child processes, to mention a few of the more notable examples. 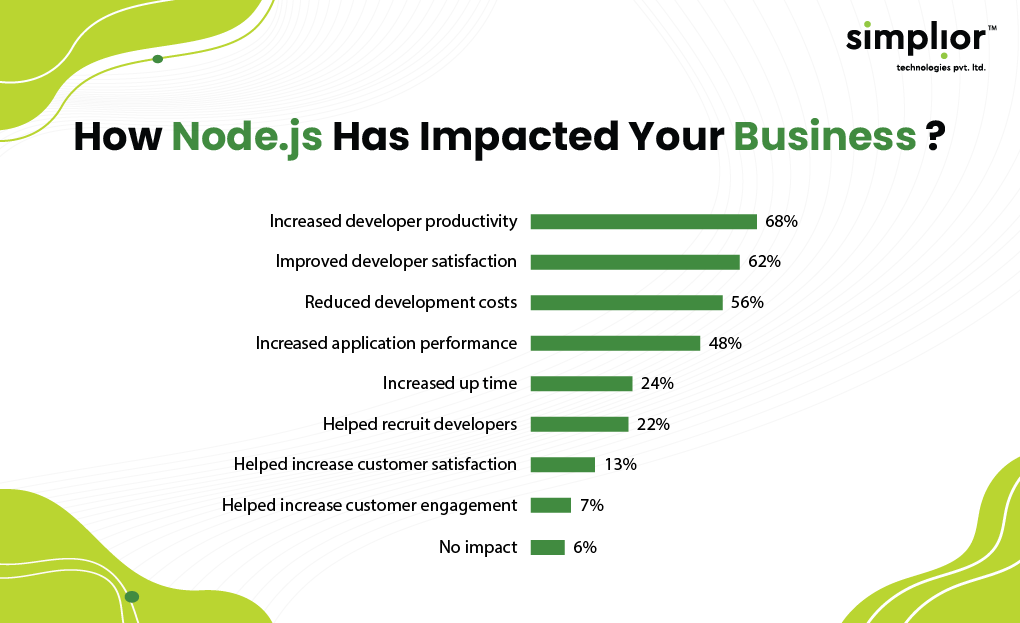 Furthermore, since Node.js uses JavaScript on both the front-end and back-end, it substantially speeds up the development process. As a result, Node.js boosts developer productivity by 58 percent and contributes to a reduction in development expenses.

Node.js development helps enterprises and corporations save more money since NodeJS can handle the same amount of load with less horsepower than other programming languages.

However, Node.js should not be used or avoided if you build a web application that requires a lot of CPU power since the single-threaded nature of the language may result in unresponsiveness. 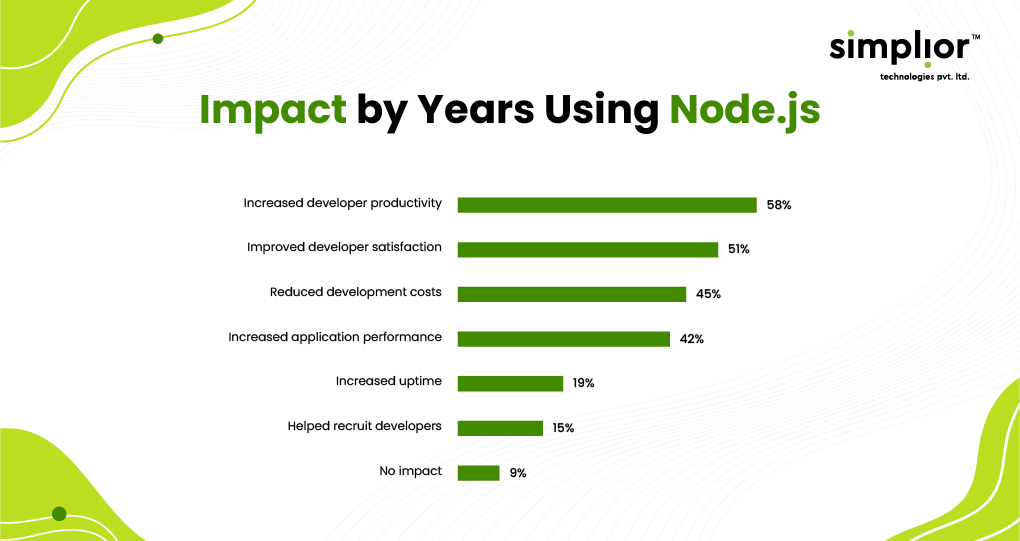 How Diverse Use Cases of Node.js are Designated

As previously said, Node.js provides a significant increase to your team’s productivity since it employs the same programming language on both the front-end and the back-end.

This scenario results in a much quicker, more efficient, and cross-functional development process, reducing development costs.

To be sure, it’s important to note that Node.js is most effective when used in conjunction with a certain kind of website.

Therefore, let’s go through the various use cases of Node.Js in-depth to understand why it’s a good idea to utilize Node.js for web application development.

Node.js vs React JS Comparison: Which is Best for Your Web App?

Top 10 Use Cases of Node.js Technology 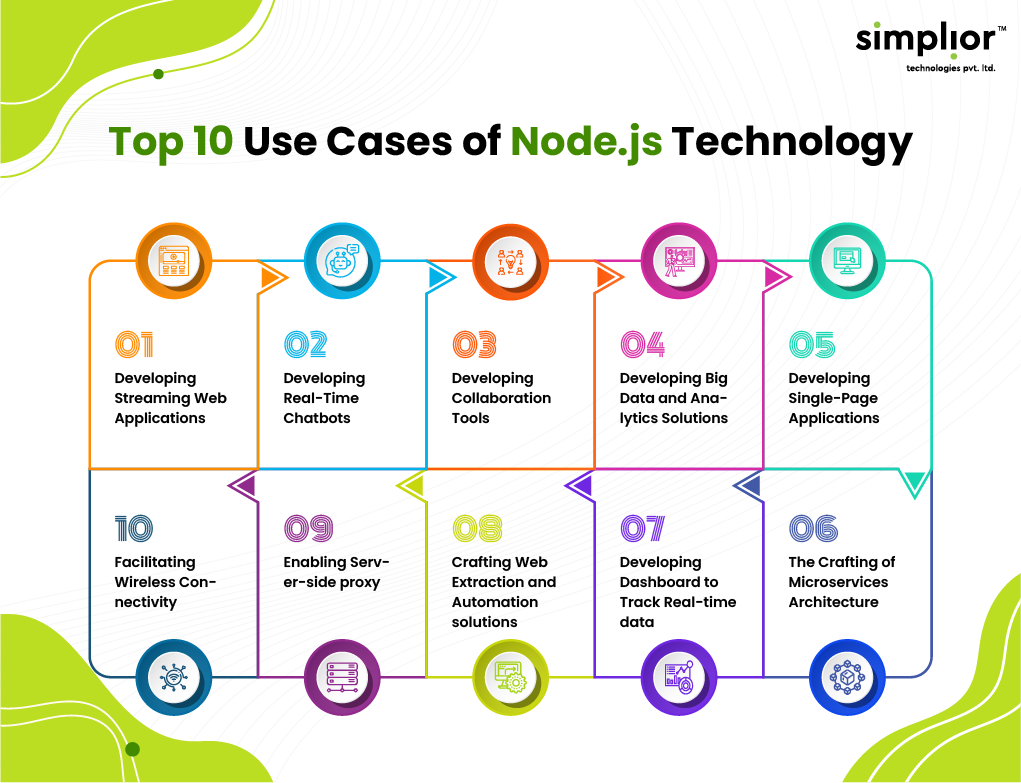 Node.js is a fantastic option for constructing streaming web applications because of its Native Stream API.

In addition, Node.js has a built-in interface for writing and readable streams, which may be processed and monitored in a fast and straightforward manner by the user.

Consequently, streams in Node.js do not need the use of caching or the storage of temporary data since it provides an open link between the data from the streaming app on the server and the local system.

As you may be aware, real-time conversations are now commonly employed on almost every website on the internet, as you may have seen. To the point that they’ve practically become a must, particularly for commercial websites and digital items,

How to build a real time chat application in Node.js using Express, Mongoose and Socket.io

Collaboration tools are simply Software solutions that you can extensively use for various tasks such as project management, audio & video conferencing, collaborative document editing, co-browsing, and many more tasks.

An immense number of I/O requests and events coincide in these software systems. For example, different users may contribute to a project management system by writing comments, updating status, and attaching files or media to a single project.

Node.js streams enable the creation of an effective pipeline, in which data begins at one point and passes through to the other end of the channel.

Therefore, it is critical to have a technique for dividing vast amounts of data into smaller portions to cope with the difficulty of dealing with enormous amounts of data.

It is possible to utilize the resources available on a computer by implementing Node.js and using back pressure to process vast amounts of data.

Single-page apps have grown more popular in recent years. In SPAs, the whole program is virtually contained on a single page, allowing users to experience similar to a desktop application.

Node.js is an excellent choice for developing SPAs since it can effectively handle asynchronous calls and intensive I/O operations.

Furthermore, Node.js is well-suited for data-driven single-page apps, in which the server serves as the back-end, transmitting data to the client, while the client-side handles all of the HTML renderings.

Your single-page application will benefit from improved maintainability and development time due to these improvements.

What is the expectation from Node.js & its Reality

6. The Crafting of Microservices Architecture

Microservices Architecture is a technique for developing a web application as a collection of tiny, independent services, each of which executes a precise function in the business logic.

Microservices architecture has been prevalent in recent years, particularly with the rise of companies such as Amazon, Facebook, and Netflix.

Node.js lightweight nature also has the potential to dramatically improve the scalability, maintainability, and efficiency of a web-based application.

As a consequence of using Node.js, the firm will be able to boost speed while also considerably reducing its codebase.

Node.js is a top selection for developing real-time online applications that use push technologies through web sockets (a two-way interaction between the servers and clients).

But, more importantly, Node.js is the most outstanding solution for developing server-side web applications, which is innovative.

Data scraping is a method of obtaining information or extracting data from completely automated websites. Many packages of Node.js make activities such as web scraping easier to do.

In Node.js, there are primarily two packages used for web scraping, namely, request and cheerio. You can use the request package to download web pages from the internet. Instead, cheerio constructs a DOM tree (Document Object Model) and makes available a subset of the jQuery function set to allow you to modify the tree as needed.

While third-party proxy services are reasonably priced, they may add significant complexity to the development of large-scale websites when used with other technologies.

However, using Node.js Development Services as a server-side proxy to gather data from various third-party services is a straightforward task.

Node.js is useful for proxying multiple services with varying response times because of its fast response time. Its server-side proxy configuration can support a high number of simultaneous connections in a non-blocking way.

Node.js is the most suitable programming language for developing a proxy server for data communication and routing since it allows for uninterrupted I/O connectivity.

The integration of IoT devices is made more accessible by JavaScript libraries for Node.js such as Node-Red, NodeMCU, and Node Serialport, which are all available as pre-built solutions.

Simplior will reduce your development struggles.
Trust the best!

Industries that can Successfully Use Node.js Use Cases 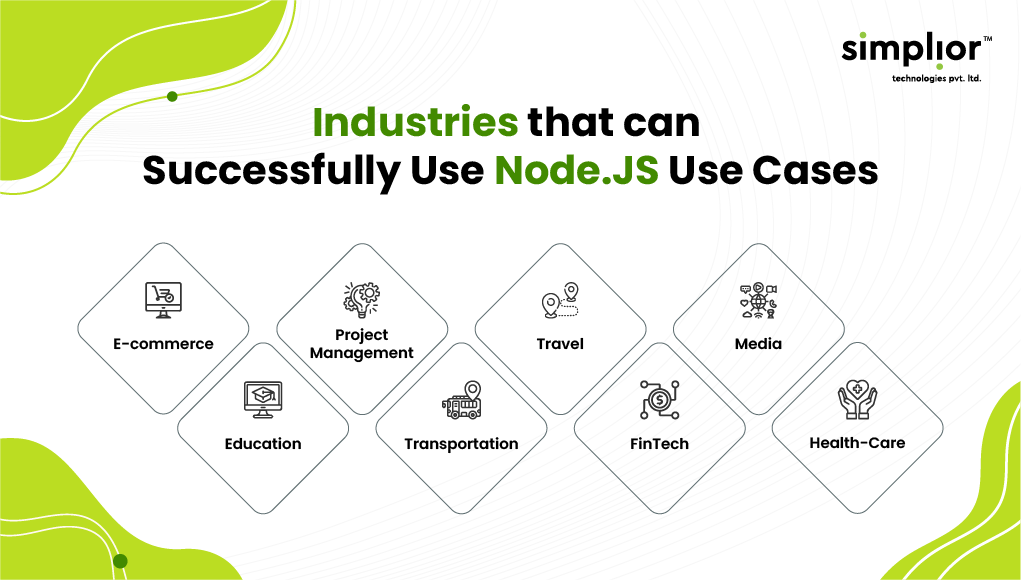 In the eCommerce market, the usage of Node.js is well-known! It may be used as a front-end for websites or as a back-end to handle the high volume of traffic during the Christmas shopping season.

Because of the Internet, the education business has been thrown into disarray by eLearning online applications.

An eLearning web app may use sophisticated features like course authoring, database administration, forums and webinars, reporting and analytics, and video conferencing to enhance learning.

Collaboration is made more accessible with the help of project management online applications. It assists users in managing and directing whole projects, whether at work or home.

You may use Node.js to construct a website search engine in the Transportation and Logistics business, just as you can use it in the Travel industry.

It is possible to build the web application using any front-end framework, such as React or Angular, and Node.js may be used as a bespoke back-end or as a web server, respectively.

This scenario works as follows: a visitor searches for a location and gets hundreds of relevant results as a reply.

Developers use Node technology who have previously implemented Natural language processing (NLP) using Python to get the same results as they did with Python. Node.js might be your preferred language to accomplish this kind of processing since it has a range of language processing packages.

However, we are unsure if the Node.js stack has the requisite horsepower for high-frequency trading, despite being perfectly suitable for usage in FinTech. It could be a good idea for a use case like that to look at using another technology stack.

The media and entertainment business daily receives more than 500k requests per second and keeps terabytes of data in its massive data centres. Therefore, it is necessary to leverage cutting-edge technology such as Node.js to construct this kind of scalable web application.

Node.js is the best option for implementing this since it can queue data or transmit it asynchronously, ensuring that requests do not get stale and that you may watch the movie uninterrupted.

Several m-Health applications offer video consultation services, allowing anybody to check out at any time. The healthcare applications provide video-conferencing support from an emergency doctor in an emergency.

When is it Challenging to Use Node.js?

With positives, there are even some challenges while using Node.js technology. Let us explore them and get valuable insights.

Node.js is not the most incredible platform when it comes to intensive computing. However, you may use some workarounds to implement these types of features. Unfortunately, the node will refuse any request made using JavaScript, making the situation worse.

When a thread is busy processing numbers, the js event-driven and non-blocking architecture is the best option.

There is no contest for relational data access between Ruby on Rails (ROR) and Node.js or Express.js. However, relational database tools for Node.js are still in their infancy compared to ROR, making it a poor fit for this task.

Node.js has quickly risen to the top of the list for developers and businesses to develop contemporary online apps.

If your web application includes dealing with intensive client-side rendering, frequent data shuffles, several concurrent requests, and other similar tasks, Node.js is the ideal solution for you.

If you are going to use Node.js in your web application, you should Hire Node.js Developers from Simplior to use all of Node.js’s features and improve the services of your Node.js Development Company.

I am the Managing Director of Simplior Technologies Pvt. Ltd., provider of IT services & solutions to startups, businesses, and global brands in USA & India. Our main target is to provide our clients with innovative solutions that open up new opportunities for them with the help of technology and help them reach new heights in the coming days.

Node.js vs Python: The Ultimate Showdown

Bootstrap vs React: Choosing The Right Front-End Framework For Your App

Node.js vs. PHP: A Relative Study With all the Useful Aspects