What do Tesla, Facebook, Skype, or Airbnb have in common? They all leverage ReactJS, a JavaScript library for building appealing user interfaces with building blocks known as components.

ReactJS developers utilize these components to craft reusable and isolated pieces for a diversity of applications. The tools help programmers with debugging, visibility, and performance added to software development.

So, blended with useful ReactJS developer tools, this convenient library assists in developing completely functional single-page and mobile apps swiftly. We will explore the ReactJS Developer Tools that can aid programmers in boosting their productivity levels.

Why is it Better to Prefer ReactJS for Building Apps?

React is an explicit JavaScript tool kit that leverages a component-based approach to craft declarative user interfaces. It is utilized for both web and mobile applications and better manages the view layer.

The objective of ReactJS is to be inclusive, swift, adaptable, and easy to use. Out of numerous open-source systems accessible in the marketplace for front-end web application development, ReactJS drives its multiple benefits.

We will discover the gains of ReactJS over other frameworks. In the endlessly altering front-end world, exploring a new framework turns into quite a tough task, particularly when that framework will certainly have a dead end.

So, if you are looking for the subsequent technology but are getting lost in the framework sluff, we suggest giving ReactJS a try.

Some reasons to prefer ReactJS are as below:

Yes, we all are mindful of the acceptance of ReactJS, how it is beneficial, and how the React programmers are using it for building striking applications. And to support ReactJS, here are some of the statistics by Statista 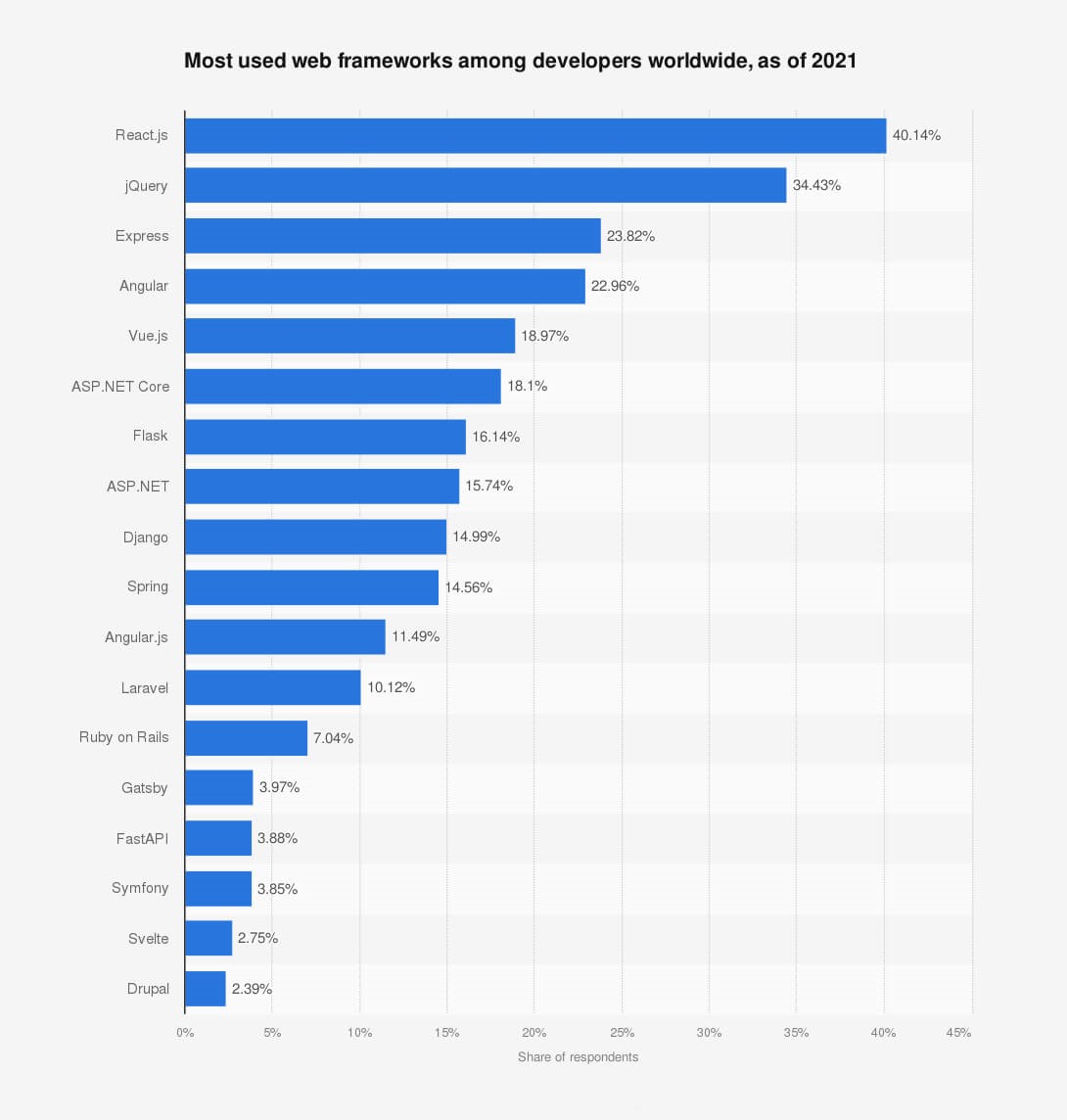 What are ReactJS Developer Tools and their Increasing Adoption?

For leveraging ReactJS effortlessly, the React team has introduced an official React Dev Tools browser plugin, especially for Firefox, Chrome, and other browsers, which eases debugging and investigative React applications. You can review the state and performance of any element or component or your complete project with these tools.

Yes, ReactJS has the likelihood to be an excellent platform for building more proactive and influential mobile and web applications. There are around 30 to 40 diverse ReactJS developer tools that have supported the widely increasing adoption and consistency of ReactJS development.

Key Benefits and Why do you Require ReactJS Developer Tools?

Now, the succeeding thing that might have cracked up in your mind is what are the real requirements of React Developer tools? There are several advantages of leveraging React Developer Tools that can offer you a vision before exploring some of the top ReactJS developer tools.

Storybook offers a sandbox for building UIs that are discrete from the business logic. The sandbox is leveraged to craft components and elements as a playground. As sandbox stores the elements as stories, it is known as storybooks.

There are different statistics in every story. The visual test case can be utilized to enable a comparison of every state. A story is fundamentally a function that creates value and is showcased on screens.

Among ReactJS testing tools, Jest is the most preferred. It is a JavaScript testing framework built by Facebook. It was developed to test React elements and components. Since it comes from the React creator and is backed by the community, it should be your foremost option with respect to testing React.

Besides, it works well for other JS solutions such as Babel, TypeScript, Vue Node, and Angular.

Jest is a configuration-free and innovative solution. The testing procedure is developed to keep the highest level of performance. For instance, formerly failed tests are run initially in the succeeding iteration.

Reactide is a widely used tool that comes to mind when we discuss React Developer tools. It is a precise and devoted IDE for React web development. Its significant gain is its independence from the platform. As the browser has an explicit in-built server and simulator, you can easily load components without having to craft them.

Reactide is a cross-platform desktop app that eases the involved procedures by automating the rendering of the React project in the browser when a single React JSX file is in use. The tool provides ready-to-use modules that don’t need manual configuration or external build tool support.

Reactide has a unified node server and a simulator to evade your dependability on the server settings. With its live and dynamic project architecture, Reactide even offers visual editing abilities. With GUI functionalities, getting essential feedback from the browser simulation is now made simpler.

Create React App is developed by Facebook and has 88k+ stars on GitHub. It offers specific single command React application setup. It enables the simple set up of a new project without any need for build configurations, project structure, and backing of modules as this tool offers you everything ready-made.

The tool optimizes the project for actual production, crafts an explicit developer environment, and offers a front-end build pipeline for developers. React programmers can save time and effort by leveraging any programming language for back-end development with this specific tool.

How React JS Is The Next Development Model?

React Styleguidist offers a collaborative environment for building isolated React components. Programmers can concentrate on crafting one element at a time, view variants, and work quicker with hot reload.

As an outcome, the development team can share components without difficulty and keep them all in one place for better accessibility. The tool seamlessly works with Create React App and backs ES6, Flow, and TypeScript.

React 360 is a precise framework for building engaging and interactive 360 experiences that operate in web browsers. It blends the declarative power of React with advanced APIs like WebGL and WebVR to assist programmers in building apps that various devices can easily access.

With taking benefits of web technologies and the strong React ecosystem, this tool is steered to simplify the crafting of cross-platform 360 experiences.

BIT is a free and completely open-source React Developer Tool. This tool is exceptional for developing and distributing React components. It facilitates the construction of your React app as a group of distinct components, which helps build scalable React applications.

BIT even offers you access to their 3rd party marketplace, where you can search for and download components developed by others, and then tailor them to meet project needs.

You won’t have to initiate development from scratch through this tool as it has automated processes for building components, enabling unit tests, and addition of documentation. The tool steadily backs React and React Native. It works perfectly with Micro Front-ends and takes care of the difficulties of code sharing flanked by apps.

We learned about 8 React Developer Tools in this blog that assists us in crafting a cleaner code. These tools comprise everything from browser extensions to APIs and libraries with precise user interfaces for preparing React applications.

These tools facilitate us to develop more robust and sustainable code while even increasing the speed of development processes. These ReactJS developer tools do not assist in meeting a solitary objective. You can blend them to build a complementary impact.

At Simplior, we have a strong ReactJS development team with proven technical expertise and experience working with influential React developer tools. We lift the app development cycle and assist you in developing your web and mobile apps with a shorter time to market by offering comprehensive ReactJS development services.

If you have your project concept or direct requirements, share them with us; our technical specialists will connect with you in no time. Contact us now to swiftly access our Best ReactJS developers with wide-ranging talent and skill sets.

I am the Managing Director of Simplior Technologies Pvt. Ltd., provider of IT services & solutions to startups, businesses, and global brands in USA & India. Our main target is to provide our clients with innovative solutions that open up new opportunities for them with the help of technology and help them reach new heights in the coming days.

Node.js vs. PHP: A Relative Study With all the Useful Aspects

12 Valuable WordPress Trends You Require To Respond In 2022